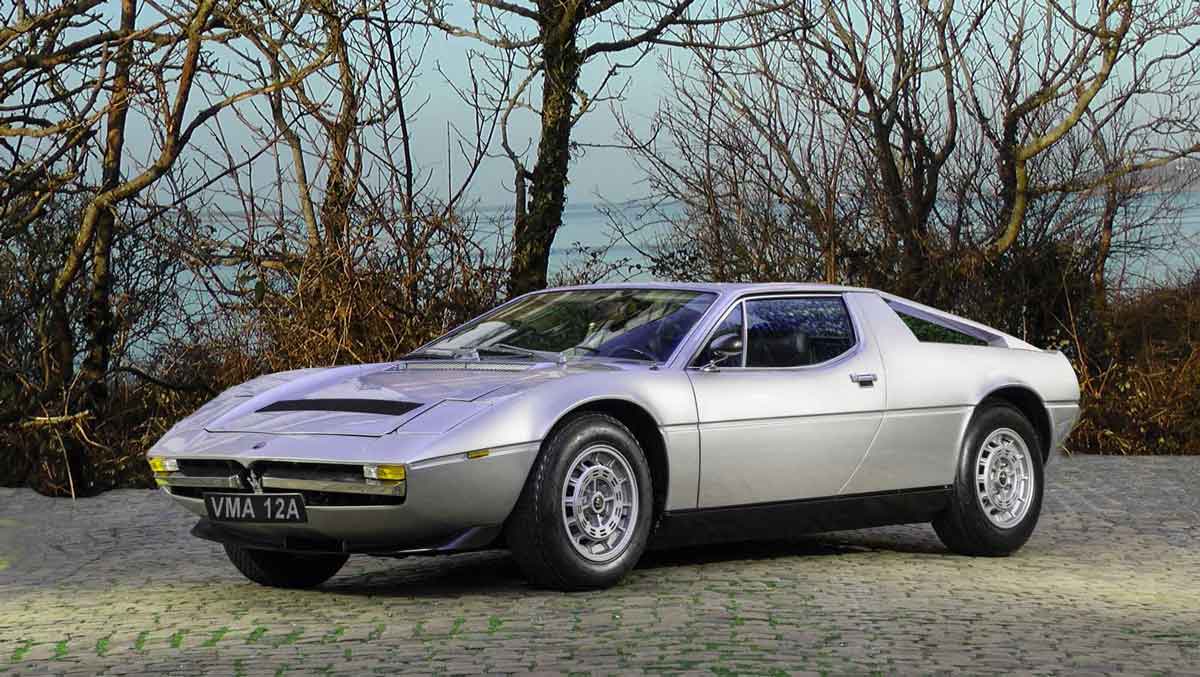 By 1972 there were two more competitors that the management of Maserati wished to take business from; the Dino 308GT4 and Lamborghini Uracco, both powered by three litre engines, and both with a 2+2 layout. Yet again Maserati turned to Giorgetto Giugiaro to come up with the answer.

This was the Merak; which bore very much more than a passing resemblance to the Bora, and which was introduced a year after the Bora at the 1972 Paris Auto Show. By substituting a three litre V6 engine for the Bora's huge V8 engine it was possible to not only cut the cost considerably but also provide space for two extra seats, although to be fair these could only be used by either children or very small adults. The car was also not only lighter but better balanced as a consequence of the positioning of the engine and a lower centre of gravity, and so it handled better as well. It was a supercar still, but a budget one.

Even so, it was no slouch. Maserati claimed a top speed of 149 mph from the engine which was rated at 187 brake horse power. It even, like the Bora, had a fair bit of boot space under the front bonnet.

Apart from the engine and bodywork many of the components in the car were made by Citroen, who owned Maserati at the time that the Merak was launched. These were complex and somewhat expensive however; and dark storm clouds were gathering over the company.

By 1976 In Italy there was considerable social and political unrest. Petrol prices were zooming up whilst economies zoomed downwards. At the same time speed limits were being introduced, and enforced, in all of the company's markets. Demand slumped. Maserati was losing money hand over fist and Citroen, in financial difficulties itself, decided that it would no longer support the company. With the help of the Italian government De Tomaso took over Maserati and the Bora was discontinued. Production of the Merak continued however but many Citroen parts were discarded and replaced with simpler and cheaper alternatives.

In 1977 new Italian taxes penalised cars with more than two litre engines; it was then decided to bring out a two litre model. This was simply achieved by altering the existing V6 engine.

Meraks continued on sale until 1983, by which time a reasonably satisfactory 1830 of them had been sold. Perhaps it's best not to invest in one though; collectors are sometimes interested in the Bora but not so much in it's little brother.