Who wants a big thirsty car at the height of a fuel crisis? 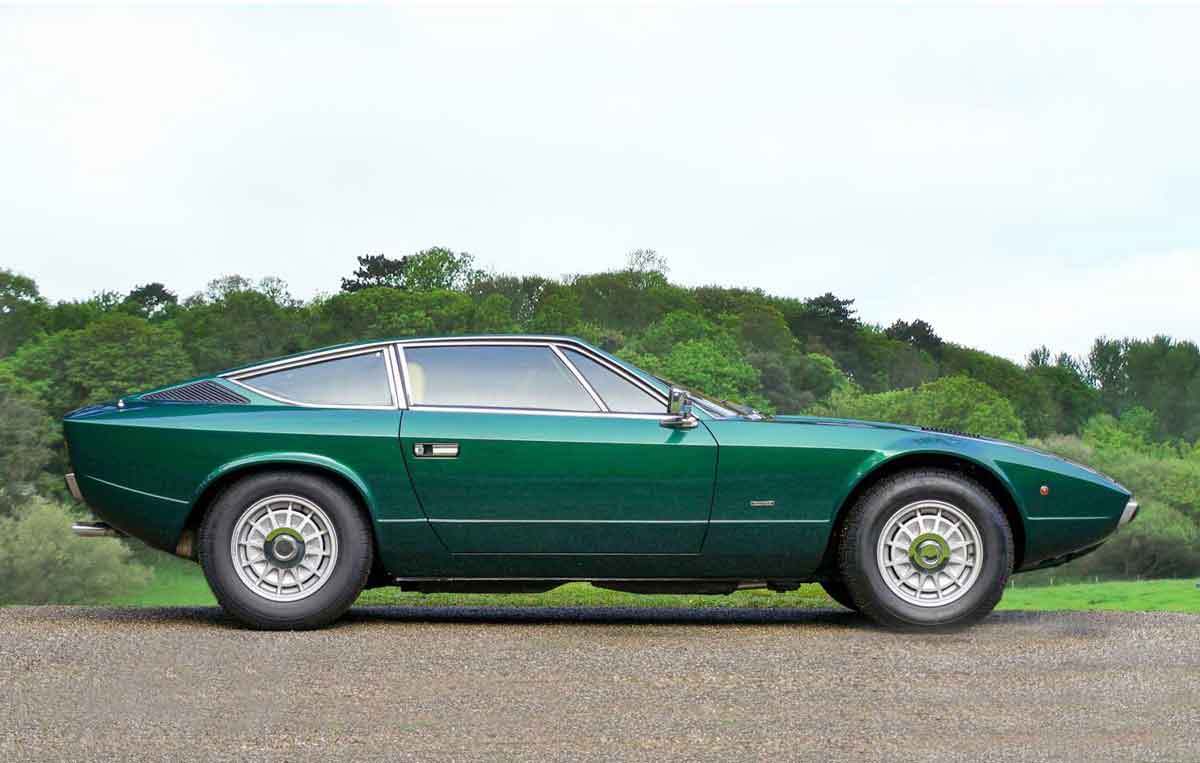 In 1972 Maserati were manufacturing the Bora and the Merak, both of which were mid engined cars, but it was felt that there were still a lot of potential buyers who preferred the traditional front engine and rear drive layout. The Khamsin, which was named after a hot, dry desert wind, was meant to be the answer. Bertone produced the concept car for the 1972 Turin Car Show; and by 1974 the car was in production.

This was a long and sleek looking car displaying a certain elegance, with a sharply sloping rear roofline. The engine was set slightly back from the front of the bonnet, which allowed space for the spare wheel, meaning that there was more room available in the boot for luggage. This was where space efficiency ended however; the car was officially a 2+2 two-door coupe but the rear seats were virtually useless. There simply wasn't enough room for heads and legs!

One useful design however was a glass panel below the rear window between the rear taillights; this gave the driver better rearward vision for reversing, although it soon fell foul of American safety regulations.

Power came from a 4.9 litre V8 engine; this gave a top speed of 154 mph and acceleration of nought to 60 within 6.8 seconds. Very creditable, but the car had been launched at a time when petrol prices were going up through the roof and large engined cars were becoming very unpopular.

At the time when the car was designed Maserati was owned by Citroen who were acknowledged masters of hydraulic systems. They incorporated a kind of variable power steering (common today but almost unheard of then) that made the steering lighter at low speeds and heavier at high speeds. Adjustable seats, pop-up headlights, clutch and brake systems were all hydraulically assisted. Standard fittings included Aircon, leather upholstery, a radio and electric windows.

Despite all these innovations the car was not really a success. The world was turning away from large engined cars and the Khamsin's appearance had to be changed in order to comply with American regulations concerning the height and strength of bumpers, and the positioning of taillights. These alterations were not popular with the Maserati designers but they were not really popular with the American public either, many of whom resented the fact that they were not able to buy the more attractive looking cars that Europeans could get. As a result sales to America, which was the most important export market for Maserati, were just a fraction of those of the earlier Ghibli.

Manufacture carried on until 1982, by which time only 435 Khamsins had been sold, a mere 155 of which went to the United States of America.